Mother Has The Most Audacious Excuse For Not Paying Her Babysitter

After working for 8 hours, a babysitter asks the children's mother for her payment. Instead of thanking her, the mother insults her! What had happened? 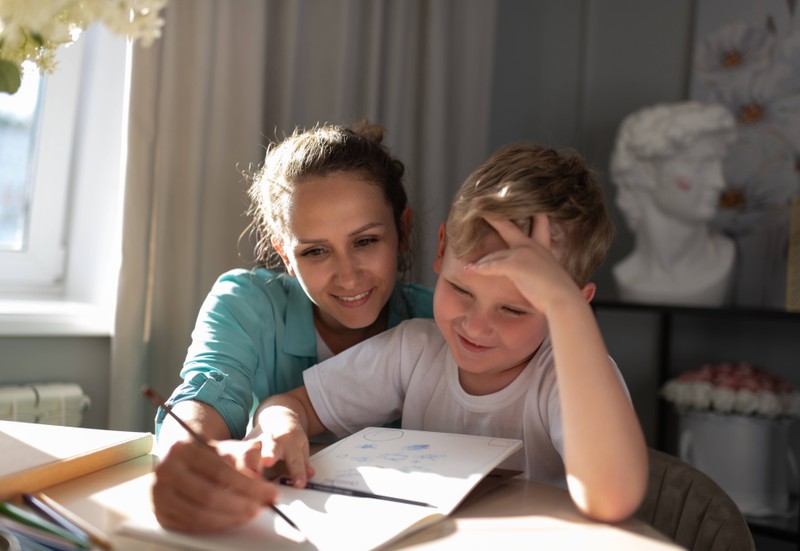 Choosing the right babysitter is usually a tricky task. Even if you think you've found a nice and competent person, who knows how they really behave when they're alone with your kid! You have to trust this person - or install a baby camera (if you're that suspicious). Either way, what is important is that parents and babysitter get to know each other. This way, both parties will feel more comfortable with the arrangement! However, not just the babysitter needs to be trustworthy - the same applies to the parents! The following WhatsApp conversation between a babysitter and a mother about payment shows which consequences miscommunication can have. Was it really a matter of miscommunication, though?!

She'll surely think twice about agreeing to a job from now on... 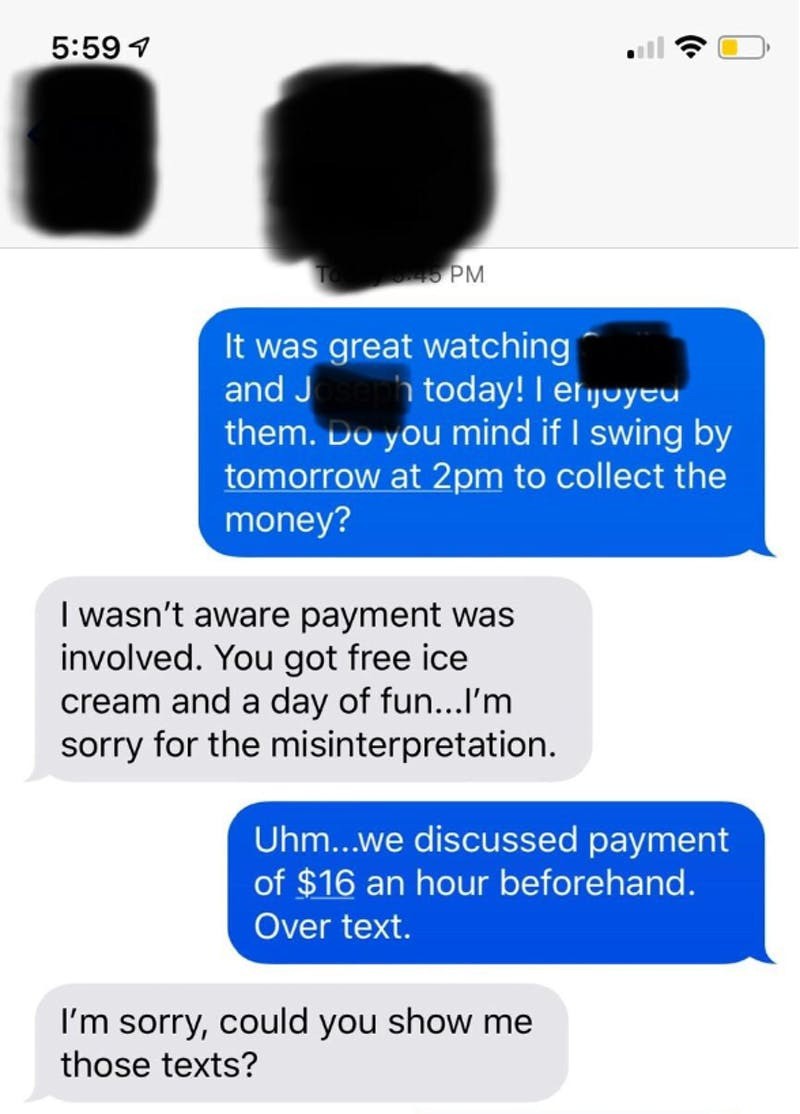 First, the babysitter thought everything was going well. She told the mother that she had a great time babysitting the two kids. Then she raises the question of payment, and the mother doesn't seem pleased about it. Quite the opposite is the case! The mom either plays dumb or she actually forgot that payment would be involved for ... a stranger looking after her kids. Did she really think that getting free ice cream and having a fun day is the reason her babysitter spent time with her children? 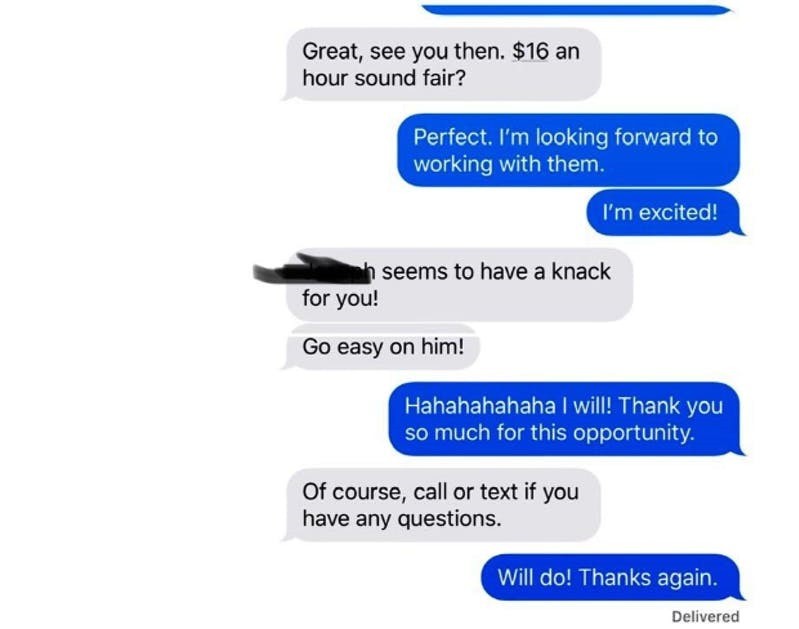 First, it seems like a misunderstanding. However, the babysitter still has the message in which they talk about payment. In fact, it was the mother who suggested the hourly rate! When the babysitter shows her an excerpt from their conversation, the mother doesn't seem too happy about it...

Then, the babysitter's client comes up with a pretty lame excuse: she deletes old messages sometimes. It seems very unlikely, though, that she simply forgot about the payment they both agreed on. The babysitter stands up for herself - we all know how tough that can be - and makes it clear that she doesn't babysit for free. 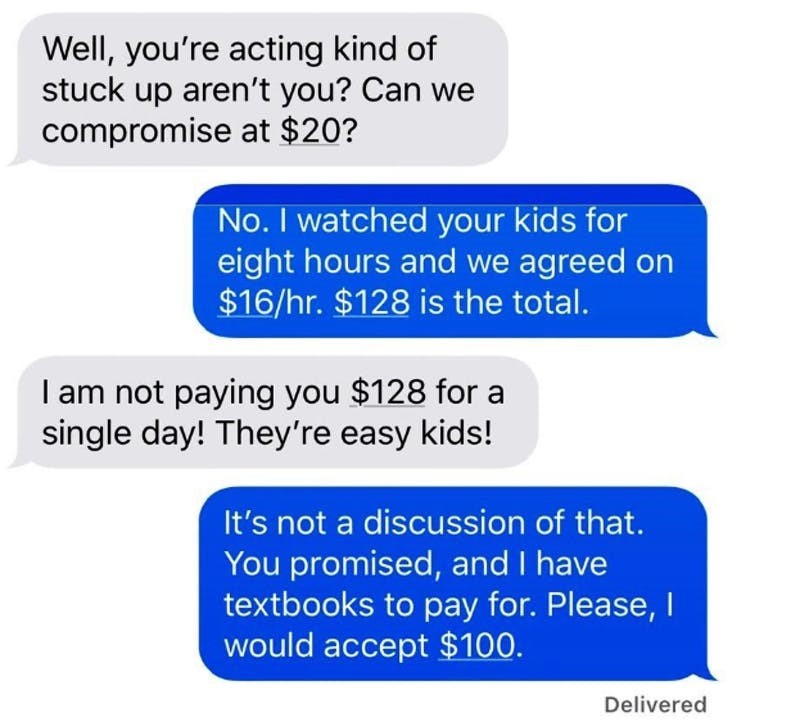 The mother seems to be incredulous about a babysitter wanting to receive payment for her services! How dare she! No matter how relaxed her children are, eight hours of work are eight hours of work. The babysitter always has to keep an eye on the kids, needs to be aware of allergies they could have, make sure they do their homework...

The mother even has the audacity to ask for a compromise of 20$ - not per hour, but in total! How would you react if something like this happened to you?

At this point, the babysitter tries to argue with schoolbooks she needs to pay for - even though she doesn't have to tell the mother anything about why she needs the money. The babysitter proposes a different compromise - 100$ in total.

By now, you can probably guess how the mother would react to such a suggestion!

This is the point where the whole situation escalates. We can only imagine how worked up the babysitter must be at this point. Funnily enough, it's not the babysitter who snaps, it's the mother. "I wish I didn't have such a stuck up b*tch watching my kids." Wow. Then she goes on to block the babysitter's messages.

We're with the babysitter on this one - are you serious?